Please see the full text below:

What is organizing and recruitment?
This is the activities that involve recognizing of areas and organization in the industry that are not yet captured under the umbrella of the union and canvasing with all necessary tools to get the workers enlisted as part of the union members.
For every industry, such as the construction industry, the managers and members of the union requires strategic prowess to get potential members interested in the union and thereafter, recruit them as members.
The Construction and Civil Engineering Senior Staff Association (CCESSA) is inundated with many challenges when it has to do with organizing and recruitment of new members.

The most daunting challenges that I have observed are:

This has to do with the way the senior staff position is seen and structured in the organization where they work. This has become enigmatic and encumbering when decision for mass outreach for organizing and out of primary station is call for. The senior staff culture in Nigeria is highly prohibitive of down to the root participation, thereby infusing already made challenge to getting workers to storm a work site or company head office with the intention of a mass action that compels the organization to do the needful.

CCESSA from my view operate more like an elite association of workers with a servicing post – called office, where the thought of the leadership while acting out the constitution is dispensed. A formidable union derives strength from active huge membership that is generated by no inhibiting canvasing from foot soldiers in their numbers that have a daily obligation of moving round to the nook and cranny of their specified jurisdictions.

To organize requires fund, you need to mobilize and give incentives where needed, this is how result oriented unions make their way into areas that seem to prove difficult.

In most organization with few senior staff or no senior staff in the union, management in those companies find comfort in lumping all workers or most workers in the junior union as they see it as more convenient to maintain low wages by implementing the junior NJIC for the workers. The other union also find it convenient as it means more check off dues for them. This is a big challenge and has been the quandary in getting management to recognize those who are suppose to be senior staff.

The subtle rivalry between the senior staff and the junior staff makes it almost practically impossible to collaborate in information sharing and support for transition from the junior cadre to the senior.

In the light of all the aforementioned, which are not exhaustive of all the challenges in organizing, but a glance into some that my mind can recall for the purpose of stirring us up for this campaign.

As part of the strategic plan of the BWI the global union in getting affiliate members to VAMOOS in organizing; has given areas of convergence in the UtoU project, which is why we are having this campaign today.

To appropriately place in perspective and be able to interrogate the way our union organizing has been structured and practice, it is imperative for us to consider some of the textual tools of organizing and thereafter focus on our resolved formula, arising from the results of our sincere interrogation of the statuesque.

HOW TO INCREASE UNION MEMBERSHIPS

Labour unions today are going out of their way to implement strategies that help increase membership. The more the number of actual members, the more collective power the union possesses.

Here are ways we can increase union memberships:

When someone sees a union buzzing with activity and positive action, it is likely that they are also attracted to join in. When members display solidarity, friendship, and collective efforts, it shows other workers that they are missing out. If they join the union, they too, could be a part of a larger group and find acceptance.

Quick tips on how to encourage active member participation are:

If certain workers are hesitant to join the union or do not see its benefits, extend the hand of fellowship to them until they see reasons to be part of the union.

Ways you can do that are:

We are part of the union and promoting it actively is a good reason to show we are proud of the union and that it can deliver on its mandate. It means that you believe it works; it improves members’ lives and brings positive change in working conditions.

These are aspects of the union that you need to advertise to non-members.

Here are some steps we can take to promote CCESSA today:

When people help to get new members sign up for the union there should be a way of recognising and appreciating the efforts made, despite that it is everyone responsibility there should be incentives to motivate organizing.

Today unions rely heavily on technology for making their work easier. The use of the following tools:

Social media is a great tool to reach out to potential members. You can use social media to:

Leverage the power of blogs

Blogs serve as a medium for varied and timely information about the union and its activities. You can write blogs about the difficulties faced by members, how the union is working towards resolving them and how members can help.

A blog can also serve as an additional advertising mechanism to highlight the importance of taking up union memberships to non-members. Share these blogs information to increase their reach.

The Union should create opportunities to lend its voice in bringing solution to issues affecting the society. Once non-members see the value we generate and the reverberating effect of our struggle both at the organization level and on a larger political scale, it makes the union look stronger.

Engage with the construction and allied community

Engaging with the community is essential to attract new members to unions today. We do this by our social contacts with people in the industry, more so with those that are gate keepers as it has to do with workers’ of our interest.

Today in organizing this campaign we should leverage on the ILO fundamental instruments such as:

As well as the four governance Conventions:

In Nigeria the labour laws reflects the domestication of the conventions and other significant areas that are peculiar to her.

How can we effectively organize our Zone? 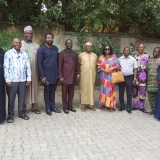